Origami: Art for Everyone 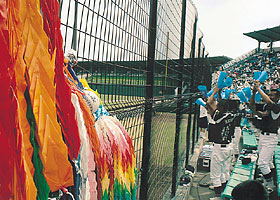 Making one fold after another and watching the paper become a three-dimensional form is more than just a pastime—it is a way to get in touch with elements of Japan’s culture and sense of beauty, passed down from one generation to the next. Origami, so easy to learn, is a world full of surprises.

Folded Close to the Heart of Japan’s Cultural Heritage

Square pieces of paper can be folded into a great many different shapes, which partly explains why origami is now a regular pastime in Japan. Behind origami’s success lies the country’s ancient cultural heritage.

Rice farming has a long history in Japan, a country blessed with relatively large amounts of rainfall. Water runs through channels that use gravity and slight differences in elevation, then flows into rice fields that are often laid out in straight lines to make a series of squares. The fields and farming villages combine to make a unique landscape. The golden ears of rice arrayed in lines in the square fields have always given Japanese people a special anticipation of the coming harvest.

The archipelago’s climate and topography produce beautiful forests of cedar, cypress and other trees that make excellent lumber. Traditional architecture,

because of its wooden beams and pillars, is based on square shapes, unlike stone and brick arches and domes that play up curved lines and surfaces.

And so, the Japanese landscape and forests have lent themselves to the development of straight lines and square shapes, and these have found a place in the hearts of the Japanese and their sense of beauty.

Land and resources are limited in Japan, and the challenge is to use them effectively. Meeting this challenge has led to a culture that makes a virtue out of conservation. Even a single piece of cloth was used without waste, to make the straight lines favored by kimono.

Senba-zuru (a thousand cranes) decorate the spectators’ area during a senior high school baseball championship game. Fans hung them here in the hope their team would win. (Photo credit: The Mainichi Newspapers)